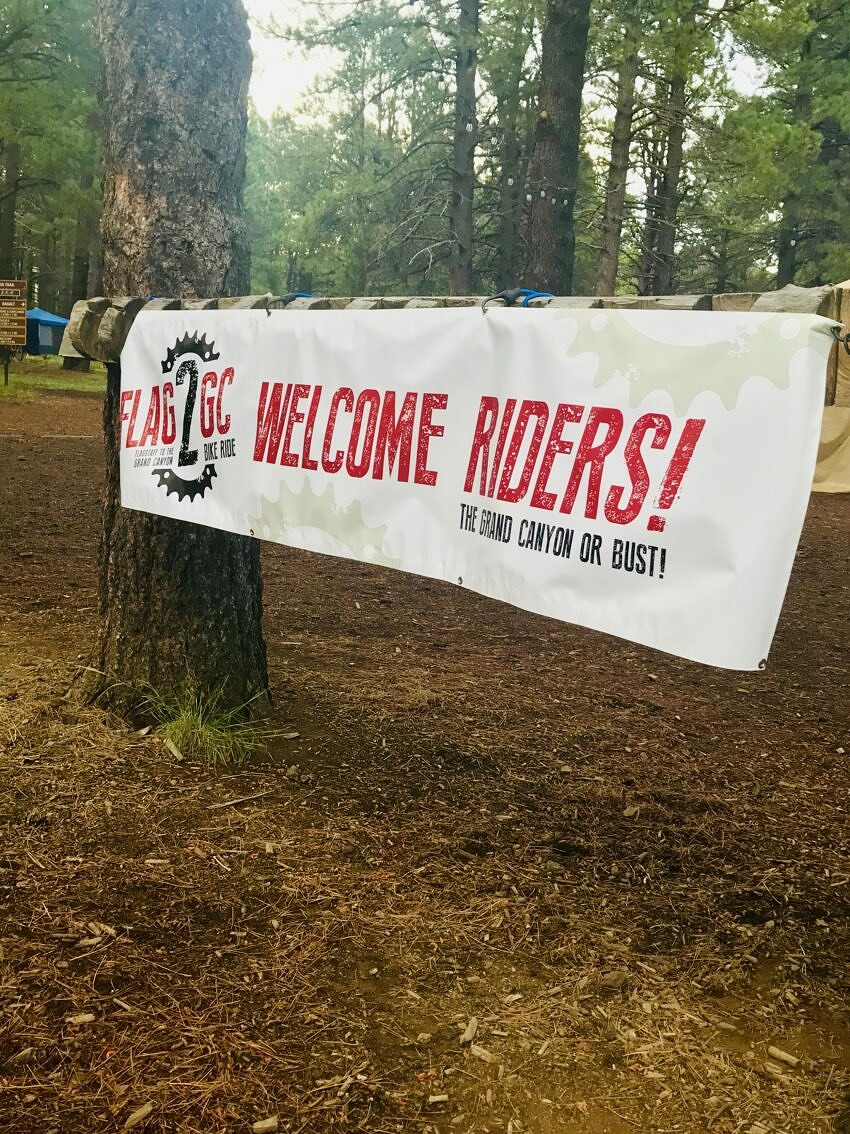 August 3rd was the annual 65 miles Flagstaff to Grand Canyon mountain bike ride; a ride that Bicycling Magazine named one of the top nine “totally awesome charity bike rides” that supports the Flagstaff Marine League Charities, a not-for-profit organization that assists the children of Northern Arizona and local members of the U.S. Armed Forces. The ride starts from the Flagstaff Nordic Center just north of downtown Flagstaff and ends just outside the Grand Canyon’s South Rim entrance. The ride takes you through 65 miles of Northern Arizona’s high country aspens, down to high desert grasslands, and back up to ponderosa pine forests.

This ride is definitely one to add to the “epic rides” category, and even though the riders were constantly reminded that this was, “a ride and not a race”, when the proverbial green flag dropped, the first big group (myself included) of riders at the front of the pack took off as if it were a race. I guess we were all looking for bragging rights that comes with finishing a 65 mile ride in record time, so even though it’s considered a ride and not a race, many of us treated the ride as just another race, so in keeping with that modality, the remainder of this post discusses the ride through the lens of a mountain bike racer.

Preparation for this ride wasn’t any different from other long endurance races. Lots of time in the saddle (about 75 to 100 miles a week), with gym time in between that focused on upper and lower body resistance training and core strength. Saddle time was spread over three days with each day focusing on specific training loads. For example, one of the training rides focused on base training specifically zone-two heart rate over long distances (i.e. 30 miles or more). In addition to physical preparation, getting the fuel dialed in was also meticulous, because I didn’t want to strap on a Camelback backpack, and I didn’t want to stop at aid stations either. I wanted to just go full cross-country, and ride through the entire 65 miles without stopping. For fuel, I developed my own concoction of Generation UCAN, whey protein, pickle juice and water that I mixed in four 24oz water bottles. I carried one bottle in my bike water-bottle cradle and the other three in my jersey pockets.

The first 25 miles of the ride was lots of fun. It was mostly 25 miles of singletrack, mostly riding on the Arizona Trail through high-country aspens. The first aid station was at mile 25. I rode through the first aid station and continued a downhill ride where the singletrack turned into fire road which went on for another 10 miles or so. Somewhere between mile 35 and mile 40 is where the slow uphill grind started. From that point on, it was nothing but slow grind uphill on fully exposed fire road through high desert grasslands. I was feeling really good for the first 50 miles of this ride, but once I hit mile 52, that’s when the shit got real. Mile 52 was when the “fun” officially ended and all work in the pain cave started, and I was down to my last bottle of fuel. At that point, I just tried to dial in on a steady pace (however slow it was) to just get through the last 13 miles. I just grinded through, and before I knew it I crossed the finish line with the final time of 5:39:42.

Overall this was a fun ride, but there was a moment when I said to myself, “Not today Satan….Not today.”, and I had to dig deep to get through the last 13 miles, and after crossing the finish line, euphoria set in the last 13 miles is nothing but a distant memory. Shortly after this ride I must’ve drunk an entire gallon of water, five beers and an entire 16” pepperoni, grilled chicken and ricotta cheese pizza, and they were by far the best beer and pizza I had tasted in a long time. It’s amazing what a little suffering will do.